To explain the MLS, it began in 1996 with 10 teams and will grow to 30 in 2022. The stadiums are the third-highest attended games in the US and it’s the fastest-growing sport in the country.

The MLS is able to attract the best names across the world with the designated player rule.

Major League Soccer began in 1996, this was two years after the USA hosted the 1994 World Cup Finals.

The women’s league began a few years later in 2013 and they’ve been going from strength to strength.

With so many sports events that take place across America, there was doubt if soccer could take place in this sporting nation.

How good is MLS?

It has proved itself by becoming the fifth biggest sport in the States from TV viewing, and the fourth most played sport.

Forbes has predicted that soccer will become the third most favorite spectator sport – showing the ever-increasing growth of the global game.

This article will explain all you need to know about the MLS to have a great understanding of how it all works.

Here is a breakdown of the MLS rules for you to know the game;

MLS Season – When they play

The soccer season for the MLS begins in February or March and finishes off in November with the climax of the MLS Playoffs.

The start date is varied due to the Football association’s schedule with other competitions when the players will be occupied, for World Cup qualifiers and the Gold Cup.

There’s a mid-season break where the All-Stars are in action. The players are selected from a selection of votes from the fans, manager, and league commissioner.

How is MLS different?

All players are selected from the MLS league, no matter the nation, and are placed against a different international side each year.

The All-Stars have been playing since the introduction of the league and have faced tough competition over the years, but have been equal to the challenge.

Whilst the European teams are in their offseason, they’ve met the most times, with top teams such as Manchester United, Real Madrid, and Bayer Munich.

The MLS players signs contracts with the league itself and not the team.

The teams are a franchise and the estimated cost of a team rose on average from $34 million in 2008 to $103 million according to Forbes.

The team valuations by Forbes estimates in 2019 the highest team valuation Atlanta United at $500 million and the lowest valuation to be Colorado Rapids at $190 million.

Although in the graph below, most teams are not making a profit, the league is growing and with the inclusion of further teams, it’s likely to bolster the profits.

Each MLS team is allowed up to 30 players in their roster, with the use of 18 on a game day, 11 substitutes and 7 on the bench.

The top 20 players are on the senior roster, allowing for an additional 10 players in the reserve/youth team.

The teams in MLS have a budget for the salary of 20 players in each team. The current budget in 2020 is $4.9 million.

The maximum salary for a single player is $612,500. The money that is spent on the other 10 players outside of the roster of 20 is not included in the salary budget.

A full list of all the player’s salaries is available to view from the MLS here.

The Designated Player rule is also known as the Beckham Rule was introduced in 2007.

Teams can use the extra allocated money to spend up to $4.9 million on 3 players. The three players are chosen from the requirements below;

So although the fund is $4.9 million, David Beckham was paid $6.5 million for a season. The total money was gathered together using DP, TAM, and GAM.

Each team in the league is given money each season for bringing in new players or keeping their current ones.

The money has increased over the last few years, allowing teams to trade more freely.

The teams are allowed to trade the allocations for money which is given to the rest of the teams, making for a fairer league.

The system on a whole allows for teams who finish bottom of the league one year to possibly win it the following year with smart trading.

Although the system, in theory, is beneficial for the league and a competitive one, there are so many rules in place that it’s difficult for the fans to understand what is what.

The system is something that is only fully understood by lawyers, but it’s a fan’s game and should be simplified for easy understanding and transfer debates.

Player transfers can be arranged prior to the set dates, although the completion must take place during the transfer windows.

Each year the dates are roughly the same, but with slight variation for weekends and vacations. For 2020 the transfer window is;

The new teams that will be joining the league are;

The teams from the East and West that make the complete league of the MLS are;

There are 50 States across the US and in a couple of years nearly half of them will have a soccer team and this is from only 10 in 1996. So the progression of the league is growing rapidly.

Here is a map of the position of the teams across the States;

The MLS playoffs are like no other around the world. Most leagues decide the winner of the season by the team that finishes the highest in the league.

The MLS format gives all teams a chance and a target for the season.

Some may think it’s unfair that the table toppers don’t win the league, but it keeps the excitement going.

New to the system is giving the league winners a bye to the next round which allows for a break to reserve their energy.

The transfer system is evolving to attract the best players from around the world, so much so it’s becoming one of the best leagues in the world.

There we have it, the MLS explained. The MLS is only growing in the States and continues to do that with the newly added teams each year.

There’s no doubt that soccer and the unique MLS format is growing and becoming more popular and rightly so. 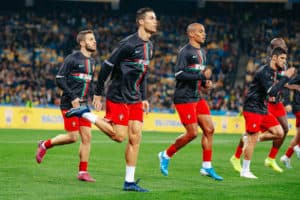 Why soccer players are the best athletes? Here’s The Result