Cleats are tools for a player. Having the correct ones can make a difference. You might be involved in a few sports and are thinking, can I use my soccer cleats when not playing soccer.

Cleats from a distance can look very similar to each other – even in sports shops, I need to take a closer look.

In this article, we take a real look at cleats from different sports and what’s similar. You’ll know what’s safe to wear.

Strictly speaking, the cleats are the studs or spikes on the outsole of the shoe. However, the term “cleat” is generally used to describe the whole shoe.

What’s the difference between soccer cleats and other cleats?

The main differences lie in the weight and cut height of the shoe, as well as the shape, size, and amount of cleats on the sole.

There are many similarities of design between the footwear worn by soccer, American football, lacrosse, and baseball/softball players.

Soccer Cleats vs Other Cleats

The main characteristics of a soccer cleat:

Soccer players are of average height, have lean muscles, and weigh around 170lbs.

They run a whopping 7 miles in a 90-minute game. They’re constantly on the move, either jogging, sprinting, walking, or jumping.

For this reason, soccer cleats are designed to be lightweight, comfortable, and give freedom of movement, whilst offering support and protection.

Soccer boots come in a few different forms. Some are based on different weather/pitch conditions:

Another crucial element in the game of soccer is the act of striking a ball. The cleat must be made from suitable material for shooting and the position of the laces also plays a factor.

Up until recently, leather was the material of choice. There are now synthetic materials available to achieve the same effect.

Lacrosse cleats will cause problems when you’re trying to pass the ball on the turf.

With the position of their studs, when you swing underneath the ball, the studs will get caught in the turf, causing your pass or shot to go astray.

The short studs will also cause problems when the turf is long or wet, causing you to lose balance or slip.

Baseball/Softball cleats are known as ‘spikes’ and are different from soccer cleats:

Baseball and softball cleats are designed to be worn on bare soil without any turf. This is the reason for the number of short, pointy studs so that they can grip the dusty surface.

Some of the cleats have metal studs for extra grip which will be dangerous in soccer.

With the higher ankle cut, it will limit the movement of the ankle, restricting some passing and shooting moves.

These are often similar in appearance to soccer cleats but are functionally and structurally  quite different:

American football cleats originated similarly to soccer cleats but have changed a lot since:

Can you use American football cleats for soccer?

Certain positions in American football, such as linemen, involve using a lot of force and contact to block and tackle.

Players may find themselves up against a 300+lbs man.

Therefore, the support and sturdiness of their cleats are of utmost importance. High-cut boots are popular in such positions.

Running backs get hit a lot, but they must also be quick and agile. A mid-height cut cleat is popular for this position as it gives a balance of support and mobility.

A few positions (such as receivers) wear low-cut, lightweight cleats (very similar to soccer cleats) for maximum mobility and speed.

Again, lacrosse and baseball have different requirements. Rapid direction changes and powerful explosive movements in lacrosse mean that a player should have higher ankle support.

In baseball, players need to be able to dig their cleats into the ground for a more solid base from which they can generate powerful throws and swings.

Do you need cleats to play soccer?

Performance: Soccer cleats are made for the sport so that the player competes at the highest level. With many sports brands designing cleats in a billion-dollar industry, the standards are the highest.

The main reasons for the cleats being different are to do with the nature of the sports. Although there are some similarities between the sports mentioned above, they’re vastly different.

Once you have selected the correct soccer cleat for your field, the studs are designed for maximum grip.

Acceleration is vital in soccer and with the wrong grip, you will slip and lose possession.

Some cleats have extra long studs for grip and by wearing them, your feet will sink into the turf and feel heavy.

Striking the soccer ball is key. Some of the cleats mentioned above have a rim around the toe area and this will impede the strike.

Do soccer cleats make a difference?

You can easily cause yourself an injury by slipping on the turf. Plus, if you’re unable to control yourself when running at top speed, this can endanger an opponent.

Sometimes accidentally, studs will catch another player, when you’re kicking the ball or sliding. Some of the studs used in the other games are not designed with the possibility.

If you don’t have the correct cleats when playing, it’s like you will be asked to leave the field and change them. If that is not possible, then you will have to be substituted.

What’re the soccer laws for cleats?

Before the start of each soccer game, the officials check the cleats of the players. When a substitute is coming on the field, the official asks the player to show the bottom of the player’s cleats, to make sure that they are suited to the game.

It’s possible that you can wear some of the mentioned cleats playing soccer against friends, but it’s not advised because of performance and safety reasons.

We’re now going to look at why soccer cleats are designed the way they are, and what makes them different from cleats worn in other sports.

We’ll also look into the fascinating history of the ‘football boot’ and what it has become in today’s game.

Soccer, as it’s known today, began to grow in popularity in the 1800s throughout Britain. It was midway through this century that the official Cambridge Rules were first established. Originally, players wore work boots when playing.

These were thick leather boots with steel toe caps and often had metal studs or spikes added to them to give extra support.

As the sport got more popular in the late 1800s, there came the need to develop footwear specially designed for soccer.

The first ‘football boots’ were similar to workboots in that they were leather but the material ran higher up the ankle for added support and the studs were incorporated into the design.

Much of the soccer-playing world was at war during this period meaning there was a lack of development in the soccer equipment industry.

However, the sport continued to grow and several new soccer brands began to emerge.

The first major development of the soccer cleat occurred in this era. A lighter and more malleable shoe was created with a view to improving players’ kicking ability, power, and overall control, rather than protecting the feet. The cleat had a lower ankle cut than before.

This period also saw the rise of two brands that would have a significant impact on world sports for decades to come – Adidas and Puma. The origin story of these two companies is a very interesting one, involving the falling out of two brothers.

Adidas introduced the first screw-in studs for the 1954 World Cup Winning German team, to great effect due to the amount of rain that fell throughout the tournament.

With the 70s and 80s came an influx of modern brands and designs. Cleats were made in many styles and colors. Leather became the primary material used. Cleats were now being designed and manufactured for performance, comfort, and style.

Both of these designs came with the choice of steel or rubber molded studs. It was becoming common to have a choice of stud types and lengths.

The 90s became the first era where the biggest footballing stars were being endorsed to wear a specific brand. Soccer, and in particular, the English Premier League was growing due to large TV broadcasting deals.

Players and what they wore were becoming topics of discussion and so, cleats became a very valuable asset for brands.

Perhaps the most iconic cleat series of all time was born in 1994: The Predator.

This unique design featured rubber ridges on the front and instep of the shoe, to give added control, power, and spin.

The Adidas predator came in many different ranges from ‘94 until ‘15 when they were discontinued. However, they have since been reintroduced and remain a top-selling cleat.

The turn of the millennium brought further developments to soccer cleats. They became lighter and more flexible. Predators continued to dominate the market but Nike and their Mercurial range were also major players.

Advancements in technology meant that players could have their cleats custom molded to fit their every need. Complete customization became readily available.

The 2010s continued in the same vein as the 2000s as the game developed to be more technical and less physical.

Cleats have become lighter and lighter over the years, with the emphasis being placed on technical performance, speed, and agility.

Modern soccer fields are of the highest quality so the soles of the cleats are now equipped with blades and short studs made from plastic and rubber.

It’s become commonplace for players to have their own signature cleat. Marketing and promotion in the social media era mean there is widespread advertising of soccer cleats.

Soccer Cleats in 2021 and The Future

What’s the next big advancement in the game with regard to soccer cleats?

With sports science, statistics, and the most minute details now having a major influence on the game, perhaps certain technologies to track in-game performance will be incorporated into the shoe.

Valuable analytics on movement, power, and technique may well be at our feet… literally. For more useful guides, see the articles below or visit our home page.

Can players wear any boot, no matter their position? Yes. In days of old, defenders and the ‘no frills’ types frequently wore a standard, non-flashy cleat.

Strikers and creative players were the main users of stylish and flashy cleats. Nowadays, players in all positions wear different types of footwear.

Much of this comes down to endorsements. At the highest level, players most likely have customized cleats so theirs may be slightly different from the standard model. 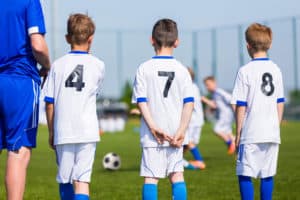 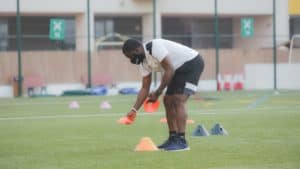