We’ve all been there. We stare enviously as some kid effortlessly lifts the ball off the ground, moving the ball from left foot to right foot, brings the ball up to their head, and back down again, all while smiling and holding a conversation.

When we try it, the ball feels like it has a mind of its own, ricocheting off unintended parts of the body, which changes this relatively stationary exercise into sprints to keep the ball from touching the ground.

x
Possession Circles video
Why is juggling so hard when Messi, Ronaldo, and Neymar make it look so easy?

Juggling itself results in unnatural movements and greater forces at play – gravity and balance. It ends up being harder than it looks. While it may be challenging to begin with, continued practice can translate into improvements on the field with ball control and awareness.

Even though it may be difficult, learning how to juggle can lead to developments with your play on the field, and you might even impress your friends with some new tricks.

To throw it as far as possible, take a run-up and release the ball when stop – moving the ball from behind the head on the last step and release when the ball is over the front of the top of your head.

Why is juggling important in soccer?

While you may never have to juggle the ball with your head ten times in a row on the field to evade a defender, juggling helps improve both your touch and concentration.

Like any skill, practice leads to improvement. With a sport like soccer, where it typically takes at least two people to complete essential competencies, juggling allows an individual to improve all on their own.

Why can’t I juggle a soccer ball?

Now that you’re interested in juggling, why is it so hard? The best of us make it look like an effortless dance with the ball, but whenever I’m starting, it seems strained and feels impossible. What should be a focused, relatively easy exercise tends to turn into a full-contact workout.

So, why can’t I juggle? There are quite a few factors at play when we attempt to juggle a soccer ball.

Typically, the beginning juggler will start with the ball in their hand, dropping the ball to either a thigh or foot.

When completing the act of first juggling the ball, balance immediately comes into play as we have to lift one foot off the ground to begin the process of juggling with either the foot or thigh. For most of us, balancing itself can be relatively straightforward.

However, we add that gravity is causing us to sway, our changed focus of concentration from our body placement to the ball’s movement.

Our eyesight changed from a set, unmoving place to a moving object, as well as our attempt to move our body to meet where we think the ball will land; it’s no wonder juggling is so tricky.

In more specific physics terms, when we juggle a soccer ball, we are working with the properties of gravity, velocity, acceleration, and force, among others.

Combining all these forces with a moving object and of course, it wouldn’t come to us quickly. Only with practice and persistence do these movements become repetitive, and we can begin to take our thinking brain out of the process.

While I’m sure all professional soccer players can juggle better than the average player, there have been some unfortunate juggling attempts on display historically.

Because we live in an age of “pics or it didn’t happen,” the only confirmed poor juggling attempts are those caught on camera.

To throw it as far as possible, take a run-up and release the ball when stop – moving the ball from behind the head on the last step and release when the ball is over the front of the top of your head.

The Brazilian defender who has achieved success with Real Madrid, Manchester City, and Juventus managed to produce a poor result at his unveiling.

The young French footballer made the big move from Borussia Dortmund to FC Barcelona, but the juggling display left much to be desired.

The Brazilian made the surprising move from Guangzhou Evergrande to FC Barcelona when used to players making a move the other way. He didn’t endear himself to the supporters and left FC Barcelona soon after his arrival.

The French defender didn’t invoke confidence with his juggling ability at his unveiling, but he is a defender, so maybe we can give him a pass. (Twitter)

The French defender may not have impressed anyone with his juggling ability but has become an ever-present name on the team sheet.

What does juggling a soccer ball improve?

Juggling can enhance the connection between your body and the ball. As a result, your touch improves, improving ball control. Try juggling for a week and get into a game. Your feet will be able to bring down the ball with an ability that you didn’t even know that you had.

Brought to you from the beautiful annals of Guinness World Records:

Hopefully, this is enough inspiration for you to get out there and start juggling! While juggling may be challenging, to begin with, keep at it and set some records of your own. 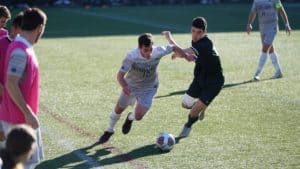