Olivia Moultrie broke headlines recently when she became the youngest soccer player to earn a contract in the NWSL at age 15.

This impressive soccer stud has been earning money from endorsements since 13 when she also began training with a professional team.

Olivia’s story is undoubtedly impressive, and fans like myself eagerly look forward to watching her progress in the professional ranks.

But the reality is that most youth soccer players do not earn money. Youth players turning professional are outliers in this country. Around the world, it’s more common for youth players to earn salaries starting at 17.

Still, youth soccer player salaries vary wildly depending on the league and experience of the player.

Some players earn only a handful of spending change while others make millions. Let’s dive into the details of youth soccer player salaries.

Can you get paid for playing soccer?

You can absolutely get paid for playing soccer. In the United States, there is a popular misconception that you cannot earn money with soccer.

There are professional soccer leagues around the world, with varying salary minimums.

While the salaries are clearly far below those in the MLS, they have risen for the 8th straight year in a row.

What level of soccer do you get paid?

While you can earn money playing soccer, players at every level do not make money. The level at which players begin earning money varies around the world.

Club soccer in the US is a “pay to play” model, meaning that families must pay (thousands of dollars) to enroll their child in the sport.

Since kids must pay to play, it’s clear that therefore most youth soccer players do not get paid to play.

Even though the NCAA recently passed a rule to allow collegiate players to accept paid endorsements, athletes still cannot earn a salary from playing.

Therefore, college soccer players also do not get paid. However, they can receive compensation to play.

A college soccer player cannot earn a salary for playing, but they can receive a partial or full scholarship to play for the University’s team.

In the United States, only professional players get paid

Most European countries do not operate on the same system.

Instead, top youth players often enter the “professional” level as youth players. Not all of these younger players earn a professional contract, but the ones that do are paid.

How much does a youth soccer player make?

However, youth players can choose to skip the collegiate level and begin playing professionally at a younger age.

Right now, youth players playing professionally are the exception. These players do not continue to play for their youth teams, they instead opt for the professional level.

Horan was the first female player to do this, but now a few have followed in her footsteps. The most recent example and the first player under 18 to do this is Olivia Moultrie.

Technically, she became professional at 13 when she accepted a deal with Nike (before the new NCAA rule that allows this).

How much do academy players get paid?

Academy players in the United States do not get paid, they pay to play. The amount that players must pay to play at the academy level is astronomical.

For example, playing on a team in the Development Academy costs $2,800 just for membership.

This number leaves out additional travel expenses to get to the games. The ECNL girls league is also very expensive, costing up to $10,000 including all travel expenses.

Outside of the USA academy players can earn money

The amount that academy players earn varies based on the location and league.

England has a robust youth system, where academy players can earn much more than other countries.

Despite immense talent, French academy players may earn the same in a year as the pro English player Raheem Sterling made in a week, which is £30k.

Do MLS academy players get paid?

MLS academies are youth programs affiliated with a professional MLS team. The goal of the programs is to develop “future pros”.

MLS controls the league these teams play in, called MLS Next. This replacement for the former Development Academy includes U13-U19 age groups.

MLS earns from youth players playing outside of the USA

MLS academy players are youth soccer players in the U.S., and thus they do not get paid. Interestingly enough, the MLS earns money for MLS Academy grads who go to play professionally in Europe.

Recently, the MLS opted to adhere to RSTP (FIFA’s Regulations on the Status and Transfer of Players).

The RSTP means that if a club from outside of the league signs a former MLS Academy player, they have to pay the MLS for player development.

Most youth soccer players in the United States don’t earn salaries because they are part of the pay-to-play model and they want to ensure collegiate eligibility.

While academy players overseas may earn contracts, salaries of low to mid-range contracts are not easily accessible.

Most of the public youth football player’s salaries are on the extreme end of the spectrum and talk mostly about 18-year-old players.

Here are some of the most impressive youth salaries:

Takefusa Kubo: Made £17k per week at age 18 with Real Madrid.

Soccer Training Ball vs Match Ball: Here’s What You Need 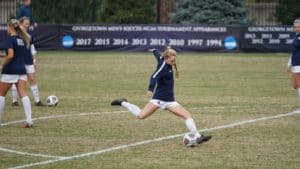 Is soccer just kicking a ball around? Inside Tips