The first soccer game I ever went to ended with the scores tied at 2 apiece after 90 minutes. As a soccer novice at the time, I had absolutely no idea what happened next.

Fortunately, my older, wise dad was there to explain to me that as it was a cup game, there would be an extra 30 minutes ‘overtime’ to discover a winner, before a potential ‘PK shootout’.

I didn’t know exactly what this meant, but it sounded exciting!

Names for No goals Scored In a Soccer Game

Can a soccer game end in a tie?

Soccer can end in a tie if the scores are level after 90 minutes, plus added time. For a knockout competition, the winner will be decided in extra time or penalties.

When the soccer game is a league game and the scores are level after 90 minutes, both teams are awarded 1 point each.

For a first-leg in a competition, it can end in a tie and the second leg in the decider.

For a knockout competition, if the scores are level after 90 minutes, the game is decided by a replay, overtime, and/or penalty kicks.

Unfortunately, my dad also explained that due to his poor planning, we’d have to miss this dramatic sounding ending and leave immediately, in order to make the last train home…

But there are a number of possibilities as to what happens next if the scores are level after 90 minutes.

So, to avoid our mistake and make sure you’re prepped if the scores are level at full time, here’s an explainer of everything you need to know about a tied game.

A soccer game can end in 0-0 with no goals scored for either team. For a league game, each team will be awarded 1 point for their league total. This is called a goalless draw.

Teams playing a similar system as each other can neutralize the game. If two teams like to play on the counter-attack, they normally wait for the other team to attack first.

Or, there can be two defensive teams that play each other. These teams focus on keeping out the opposition, while they wait for a chance from a freekick or corner.

These games can be dull, but there are tactical games that are interesting that end 0-0. The first of some two-legged games can end scoreless.

What happens if a soccer game is Tied After 90 minutes?

If two teams are tied over 90 minutes, teams get one point each, or there’s a replay, or penalties for the winner, or even extra time then penalties.

There are several options for what happens next. This will depend on:

So, now we know that ties are a common occurrence, let’s look at the various options for settling a game.

Shared points after a tie

If the game is part of a league – either a standalone tournament or a group stage as part of a bigger tournament – then a tie usually results in the two teams sharing the points.

This means both teams are awarded one point each towards their league total, rather than three points which would usually be given to a team winning a game.

In this case, the game simply ends at 90 minutes as there’s no need to settle the outcome.

Equal Points in a League – The decider

In the MLS, the decider of the league is by a knockout stage. So the following applies to qualification and other leagues in the world.

Where teams are level on points within a league, there are several ways of separating them.

Most commonly, teams are ranked by goal difference (the number of goals you’ve scored minus the number you’ve conceded).

If this is also tied, they’re separated by

While teams have never finished with identical points and goal records in any of the major soccer leagues, a tie-breaker was used to decide the 1963-64 Italian league title.

Before they had introduced the goal difference rule. Bologna beat Inter Milan 2-0 in a tiebreaker game to seal the title.

Replay After a Tie

Teams aren’t playing for points, so we need some way of deciding who should progress to the next round.

One way of doing this – used in the English FA cup for example – is simply to replay the game.

Nowadays, competitions usually only allow one replay, to avoid fixture congestion. If the replay also ends in a tie, one of the methods below is then adopted.

But this wasn’t always the case. In 1989, two English sides – Newcastle and Watford – played 4 times in 11 days before a winner could be found!

Overtime to decide a tie

Probably the most common method for settling tied games in a cup competition is through a 30-minute period of overtime – also referred to as ‘extra time’.

This simply means teams playing for 30 additional minutes (made up of two 15-minute halves) to see if one team can outscore the other.

Standard overtime continues for the full 30 minutes, regardless of how many goals are scored in this period, with teams switching ends after 15 minutes.

In 2010, England’s Leyton Orient scored 6 extra-time goals to beat non-league Droylsedon 8-2 after overtime, even though the game had been tied after 90 minutes!

But what happens if teams are still tied after an extra 30 minutes? Cue one of the most dramatic events in soccer.

The PK shootout after a tie

Perhaps one of the most exciting events in soccer – the PK shootout.

Each team selects 5 players (who must all have been on the field at the full-time whistle) to try and score from 12 against the opposing keeper.

This truly is a chance for heroes and villains to be formed, with every kick and every rejection taking on huge significance.

Teams used to take it in turns to take PKs (so kicks would be taken alternately by team A, team B, team A, team B) but increasingly tournaments are using an ABBA method.

Science shows that teams taking their kick first have a slight psychological advantage, so this new approach is an attempt to even that out.

If teams still can’t be separated after 5 PKs each? Then the drama ratchets up again as we move into a ‘sudden death’ shootout.

This means teams taking a further one PK each, until only one team scores.

Importantly, individual players can only take one PK in a shootout, until every other player in the team has also taken at least one (so if your best striker takes the first PK,

He can’t take another until the whole team has taken at least one). This means that as the shootout goes on, players less and less confident taking penalties are required to step up.

Sudden death PKs are rare, and shootouts are usually settled relatively quickly, but they can occasionally go on and on – getting more and tenser.

The final two methods of settling a tied game are now largely consigned to history. The first experiment, golden goal, was a variation on standard overtime.

Rather than simply playing out a further 30 minutes, teams would simply play until one team scored.

Whenever this happened, the game would end immediately and the goal would win the game.

Perhaps the most famous example of this was in the final of the 2000 European Championship, with France beating Italy via a golden goal.

If no goal was scored in 30 minutes, teams would face a PK shootout.

While the golden goal has now been abolished by FIFA and is no longer used in major international tournaments, it’s still used in some more minor tournaments, for example in NCAA soccer championships.

This meant that if a goal was scored during overtime, teams would continue to play until the end of the 15-minute half.

A further variation – called silver goal – was briefly used by UEFA, perhaps most famously in the 2004 European Championships.

So, if a team scored 10 minutes into overtime, the opposing team would have 5 minutes – until half-time – to find an equalizer.

If they managed to do so, the second half would be played; if they failed, the game would end at halftime.

This format was felt by many to be confusing and arbitrary – most famously when the Czech Republic lost to a Greece goal scored after 105+1 minutes (the very end of the premier half of overtime).

This highlighted the drawbacks of silver goals and the format was abolished soon after.

Games Ending in a Tie

So, there we have it: yes – soccer games absolutely can finish in a tie. In league games, this usually isn’t a problem, with teams simply sharing the points between them.

However, when the game is part of a knockout competition and a winner is needed, there are a variety of ways of deciding the outcome.

From overtime to PK shootouts, tied games can often give us the most famous and dramatic endings.

So, make sure you know which format applies to your favorite tournament – after all, you don’t want to miss the last train home after discovering that an extra 30 minutes is needed to settle the outcome!

Why does a soccer game go over 90 minutes?

When the ball is out of play the referee will stop their watch and the same for injuries and free kicks. The referee will add on time at the end of each half causing the game to be longer than 45 and 90 minutes.

How does a soccer game end?

After 90 minutes the referee or assistant will signal the amount of time to be added to the game. In professional soccer, a board will be held up to show the added time. Extra time can be added to this when the ball is out of play. 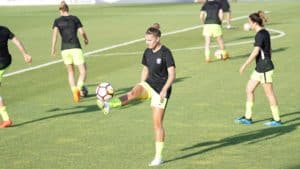 Why do soccer players have big leg muscles? Here’s what to do