Sometimes you’ll see soccer players wearing a hat, jewelry, and glasses. But it’s not obvious if all players are allowed because it’s less common.

In this article, I’ll guide you to what accessories you can wear on the field and some of the famous players that do.

The International Football Association Board (IFAB) states that they may not wear all jewelry on the soccer field.

There are provisions in soccer equipment laws for the wearing of hats and glasses though.

Any attempt to cover the Jewelry with tape is prohibited too, even if your partner requires it from you!

Safety on the soccer field is a primary concern for the lawmakers of the game and is dealt with in the IFAB’s Law 4, which addresses played equipment in its entirety.

Jewelry falls under the category of equipment that presents potential harm to other players on the field. This includes the soccer player wearing Jewelry.

However, the other consideration to be made centers on equipment that protects a soccer player in the field. Among the more obvious protective items are things like shin guards and cleats.

It’s a duty for soccer officials to check players before they enter the field of play. It’s a critical aspect of their jobs.

However, there are those soccer players who slip under the radar.

If they find a soccer player to be wearing jewelry either before entering or while on the soccer field, the match officials will tell them to take the prohibited items off.

We all know how rebellious soccer players can be, though. The intensity of the game and the testosterone involved in the game hype a player’s mood.

You can imagine the potential for a soccer player to resist instructions to remove jewelry.

Under those circumstances, a soccer player can be ordered to leave the field when the play stops again.

Sometimes, players deserve some benefit of the doubt and cannot remove the offending item while still on the field of play.

A repeat offense or blatant refusal to remove jewelry can cause a caution for the offending player.

Padded hats that protect a player from head injuries are permitted under special circumstances.

Besides shin guards and cleats, other protective items on a soccer field include headgear/hats.

There is also a provision for the conventional baseball cap on a soccer field. It’s very common to see goalkeepers wearing caps on soccer fields, at all levels of the game.

That’s because they’re the only players permitted to wear caps on the field.

We live in an age when caps have become somewhat of a fashion statement. We often encounter sporting codes where the caps are worn backward.

For the soccer goalkeeper, there are very logical reasons to wear a cap. Playing a game in the evening when the sun is low can affect the goalkeeper’s view, to the point of being temporarily blinded.

Goalkeepers already have a considerable amount to think about when they’re on a soccer field. The last thing they need is for that irritating ray of sunlight to distract them while trying to produce a shut-out.

Rain and wind can distract players on a soccer field. The conditions can alter the game and the style of play.

Some countries have to deal with the rain, sun, heat, ice – so it’s understandable that accessories are needed to play.

Wearing caps is limited to goalkeepers and each individual league may have its own regulations.

Soccer lawmakers FIFA also clarifies that they permit sports spectacles on a soccer field. If you wear glasses for any reason in your day-to-day routine.

A common sporting principle is that this should not be able to hinder you on the soccer field or any other player.

It’s not uncommon for professional athletes to wear contact lenses when they’re on the soccer field.

Offensive and defensive players will have more challenges than most with wearing contact lenses. Dirt or grass in the eye will be a call for the physio to apply the eyewash.

‘Non-dangerous protective equipment, for example, headgear, facemasks, and knee and arm protectors made of soft, lightweight padded material is permitted as are goalkeepers’ caps and sports spectacles.’

The prospects of those contact lenses falling out and breaking are high. It’s a massive inconvenience at the best of times.

Soccer can present some physical dangers. Sports glasses or protective goggles are the best way to go to a soccer field, for a few reasons.

Edgar Davids is one of the most iconic players to kick a soccer ball, he won three Scudettos with Juventus and he conquered Europe with Ajax. He did this whilst wearing protective goggles.

They’re protective goggles that Davids wore because of his battle with glaucoma.

His illness did not stop him from playing though, he was a top player and could pick a pass out.

Players that are returning to the game after sustaining an injury to their face, for example breaking a cheekbone may wish to protect themselves by wearing a mask.

This also applies to any other protection that’s needed. The key importance is that the equipment will not endanger another player as FIFA states;

What many soccer fans didn’t know is that the French legend had some issues with eyesight – and that he wore contact lenses on the soccer field.

He still managed to win the World Cup with France.

Truth be told, I always had his suspicions about AC Milan and Brazil legend Kaka. There was seldom a moment on the soccer field when he didn’t look like he was squinting.

He wore contact lenses during soccer matches and won many trophies at Real Madrid.

The Dutch soccer player is the one most responsible for making the protective goggles fashionable on a soccer field.

It helped that the soccer fraternity was dealing with a European and Serie A champion here, a prominent player during a legendary period in global soccer.

Despite all of his most redeeming qualities as a player, the glasses stole the show.

Once among the most sought-after soccer goalkeepers in the world. A key feature for any goalkeeper is the capacity to develop a read for the game both on the defense and when turning defense into offense.

Your peripheral vision is critical under those circumstances. Dea Gea is among those soccer players who need a little help with that.

We know him to wear contact lenses when on the soccer field.

He’s often been seen wearing spectacles at formal events. They make him look rather dashing if we’re honest with ourselves.

That’s all the confirmation you need that the Portuguese soccer legend wears contact lenses when he’s on the soccer field.

Petr Čech is famous for wearing a protective cap whilst playing for Chelsea and after an injury caused serious damage.

The Burnley stopper is famous for wearing caps. He may be more known for his days at Manchester City.

The Burnley stadium Turf Moore is made up of four stands and they’ve open corners that allow a considerable amount of sharp sunlight in.

The angle of that sunlight is often awkward for goalkeepers. Hart seems to have extra trouble with it. He wears caps often.

Adam is a Welsh player and Wales is one of the wettest countries in Europe. Cloudy, wet and windy is the description used for the climate in Wales.

We can forgive him for being bothered by the sun when competing in the English Football League Championship.

I’ve known him to wear a cap while on the soccer field.

Chris Played a lot of his soccer in the English Football League Championship.

There is a trend here, which seems to suggest that it’s more acceptable for goalkeepers to wear caps while competing in the lower tiers of English soccer.

Soccer rebellion is not a new phenomenon. He made his professional debut in 1969. The images of him wearing a visor are popular in searches and among soccer-loving fans.

There is more to him than just that visor though. One would hope so, after 768 professional appearances in England.

The laws of soccer have been made for the safety and protection of players. So it’s understandable for some players to wear hats and glasses.

Is it better to wear glasses or contact lenses in a soccer game?

The professional players wear contact lenses as they’re more secure, it’s okay for a youth player to wear glasses secured around the head.

Goalkeepers must wear shin pads like outfield players. Some goalkeepers have padded shorts/pants/sleeves to protect them from a fall from a dive. 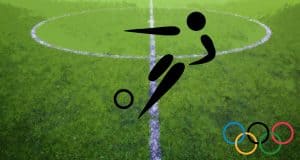 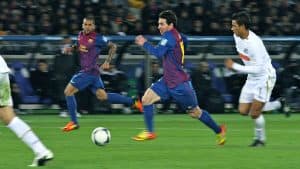 What is Soccer? All You Need To Know! 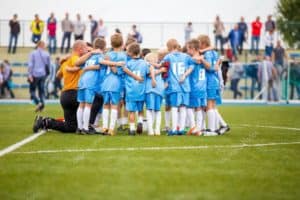