Know your duties in defense, stay the goal-side of the attacker, put your body on the line, and be brave. Get better by improving your fitness, strength, speed, and timing.

Follow this guide to know what your duties are as a defender. Each position has different roles to play.

As a defender, your first duty is to defend the goal and when you get a chance to support the attack as a wide defender.

Take part in the soccer drill below to test yourself in the toughest situations like the pros. Practice as much as you can and with good quality players to push on your game.

An online soccer course could be just what you’re looking for, see all of the skills you can learn at Coerver, their packages are awesome, they have coaching for every type of player, click here.

Qualities of a good soccer defender

A good defender must be strong, aggressive, brave, and a team player. It takes great determination to be a great defender, a willing nature to get to the ball first.

You can be tall and small whilst being strong in challenges and able to work as a unit.

Some soccer players are naturally good at defending – if you don’t like to get beat then that could be you. If blocking a shot on a goal is like a goal being scored for you then you’ve got the mindset of a great defender.

Along with the mental attributes, the physical aspects play a part. If you want to play center back then it best to be 6 feet or more.

For a full-back, you can be tall or short, but most of them are short because they have the legs to accelerate up and down the field.

Some of the best defenders are willing to put their bodies on the line, literally!

Players will do anything to score, so you do all you can to stop them, even if that means diving into a crowd of players when a stud might catch your face.

When defending 1 v 1 you must keep between the attacker and your goal. Be close enough to block a shot, but not so close that the attacker can get past you. Be on the lookout for other dangers as the play changes.

You need to angle your body so that you protect the danger zone. This way you can lead the attacker away from where they want to go.

Keep an eye on the player and the ball and when the attacker looks up, you’ve got a chance to poke the ball away.

It’s important that you’re good at sprinting in bursts. A player may be slower in a sprint race, but they might have the acceleration to get a couple of yards in front of you so that they can take a shot.

Some players go to the ground in a slide tackle, but make sure that you’ve got a 99% chance of getting the ball if nobody is covering behind you.

The last thing you want to do is leave them one on one with the goalkeeper or with more players than the defenders.

Defensive drills are to test the players in situations that occur during a game. Having fewer defenders than attackers really put pressure on the backline.

Practice 20-yard sprints and they are the most used distances when running. Below is the most common type of soccer drill that you can practice your defending.

This drill is used by all professional clubs – it replicates the hardest of situations in a game. If you can defend with one less player than the attackers, then you can do it against an even number of them.

The types of positions that you can play as a defender are, center back, full back, wing back, sweeper, and defensive midfield.

What is the role of a center back in soccer?

A key part of the defensive unit, the center back operates in front of the goalkeeper. They are the last in line before the goal.

What is the role of a full back in soccer?

Full backs play at either side of the center backs in a typical 4 four at the back. In Italy, they operate defensively but in Spain, they are used for an overlap to provide an extra player in attack.

You can be of any height but you must be quick! Some of the trickiest players you face are wingers, so you must be on your toes. Fullbacks are most likely to slide tackle the ball out of play.

What is the role of a wingback in soccer?

A typical wing-back plays as part of a back 5. With three in the center of defense, they have fewer responsibilities when defending.

They are good all-around players as they have many duties to cover along the flank of the field. The attributes required are crossing and stamina.

What is the role of a sweeper in soccer?

A sweeper is not often used because of the problems with offside, as they are the last player. They are normally used with five at the back and the central one is the sweeper.

They clear a danger that comes the way of the goal. It’s a responsible position because they organize the defense and protect the keeper.

What is the role of a defensive midfielder in soccer?

Some defensive midfielders play up and down the field. There are some that drop back when your team has possession.

Guardiola uses this system, to allow the full-backs to advance forward leaving the two center backs and defensive midfielders to protect the goal.

Here is a selection of some of the best defenders in the world. Watch their qualities to learn how they do it. They are all very different, but effective at shutting out the strikers.

How do you defend faster in soccer?

Knowledge of your all-around game will improve your game in defense – if you know what the striker will do, you’ll know what’s coming.

Experience in the game will make you faster physically and mentally. The more games you play, the better you’ll become. It also helps to watch a lot of games.

Read more articles to improve your all-around knowledge of the game. 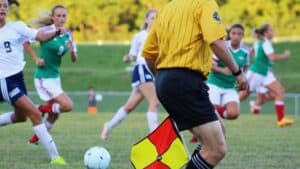 Why are Soccer Players Skinny? Here’s Why…

How and When Was Soccer Invented? Must-Read 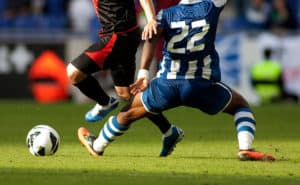 Can You Use Your Arms in Soccer? Helpful Facts