Whether listening to professional announcers, general soccer fans, or people who don’t know much about the game, you’ll hear a lot about the goal-scoring forward.

In soccer, a lot of the conversation and recognition revolves around forwards, but is that really where the strongest players on the team play?

In reality, every soccer position has components that make it difficult. You should not necessarily put your strongest soccer player as a forward. Instead, you should put them in a position that best suits their strengths while helping the team.

To determine the best position for a strong soccer player, you must narrow down what makes them a strong player, consider their interests, and evaluate based on your team’s style of play.

What is the toughest position in soccer?

There is no soccer position that is more difficult than others. Each position demands different strengths and has different challenges associated with it.

For example, if you take an incredible striker and put them as a goalkeeper, they probably won’t excel. The opposite is often also true.

Every soccer position is tough in its own way. Let’s take a look at some of the demands of each position.

As the last person standing between the opponent and the goal, the goalkeeper has a crucial job. They can see the entire field and use their hands within their box, but that doesn’t make this position easy.

Here are some of the skills that goalkeeping requires:

Central defenders play a crucial role in team defending, but they also begin the attack. They are often the last field player back, with only the goalkeeper as a safety net. Here are the top skills required of a center back:

Don’t let the word “defender” fool you. The modern-day outside back must be able to contribute defensively and offensively, especially for formation variations of the 4-3-3 (like the 4-1-2-3 or 4-2-1-3).

Quality outside backs (and wing players) must be:

Center mids are pivotal for the attack and defense. They are crucial for a team’s transition and must contribute on both sides of the ball.

Some of their key strengths include:

Wide forwards have many of the same demands as outside backs, but strikers have a different key role. The best strikers are goal-scoring machines, but they also bring a lot more to the table.

Here are the top skills strikers have:

What position is the most important in soccer?

Every position plays a critical role in the game of soccer. As a team sport, soccer requires the efforts of every player.

If you ask the average person what position they think is the most important, there’s a good chance they’ll say forward/striker.

While you do need at least one goal to win, you must be able to thwart the opponent’s attack effectively.

ESPN argues that the goalkeeper is the most important position because they:

Who is the hardest working soccer player?

Every player in every position must work hard to help their team. Despite the importance of every player, midfielders and wings are often seen as the hardest working.

According to the Bleacher Report’s analysis of the 15 hardest-working players in the EPL, 5 were midfielders and 5 were wings.

Central midfielders, especially the common “box-to-box” midfielder, have to cover a ton of ground. They must quickly transition from attack to defense and vice versa.

They control the center of the pitch and have to be focused and working at all times.

Wings also cover a lot of ground, and often in a sprinting fashion. Wings are tasked with the challenge of pushing high into the attack and whipping crosses. They are often athletic and incredibly hard-working.

Where to play your best soccer players?

If a goalkeeper is such an important position, should you put your best player there?

Not necessarily, but you should put your best goalkeeper there.

There is not a one-size-fits-all answer for where to put your best player.

Determine their strengths. Choose a position with demands that align with the player’s strength and can expose the opponent.

Once you’ve defined what makes the player strong, then you can best find a position that illuminates their abilities.

Here are some qualities that may make a player stand out:

Based on the areas the player excels in, you should match them with a position that allows them to have the biggest impact on the game.

Here are some examples of where to put players based on their skillset.

Skillset: Fast, great at dribbling, and solid 1v1 defender. However, they are not the best at shooting.

Position: outside back, wing-back, or wide mid depending on your formation.

Skillset: A well-rounded player that nails all of the fundamentals. Above average in all core skills (passing, dribbling, trapping, shooting, defending) but lacks one stand-out quality.

Skillset: Powerful, accurate shot. Always hunting for the goal and willing to fail, but may not be the fittest or best at defending.

Skillset: Great 1v1 defender with excellent composure that may not be a fantastic dribbler or shooter.

Where does the best player want to play?

Far too often, coaches identify a strong player and become determined to play them in a certain position. The player’s strengths could be a perfect match for a position in your formation, but if the player hates that position it probably won’t go over well.

At the highest levels, players may not get a say in where they play, but for developing players, it is important to consider their interests.

If you want your best player to perform their best and love the game, ask them where they like to play.

Great soccer players play all over the field. Where you put your strongest players should depend on their strengths, weaknesses, and interests as well as your team dynamic. 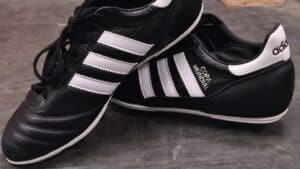 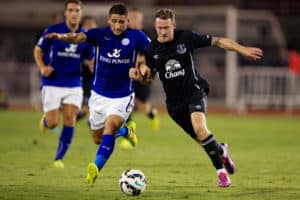 Using Your Shoulder In Soccer