Is it too cold to play soccer in fall and winter? I often think so, when the season comes around, but after five minutes of playing, I don’t notice the cold.

Although, some conditions are too extreme for this sport.

Soccer can be played in the fall and winter on the right surfaces with the correct cleats. Although, conditions need to be suitable for human comfort and safety.

Professional soccer fields are heated for extreme conditions. So they can work around most conditions.

The fall brings winds, rain, and snow. It’s not the same as playing soccer in the summer.

Although, there are some advantages to playing in fall and winter.

The temperature in the height of the summer months can be too much, especially in the direct sun. Which requires water breaks and even air-conditioned stadiums.

During the colder months, much will depend on your location. From the north to the south of the states, the conditions vary so much.

The MLS season begins in March, the playoffs are in October and the finale is in November.

So here in the US, the professionals play soccer in the fall, with a break for the winter months. In other sports like football, that is played until early January.

The competition for TV viewings and the following that football has may be the reason why soccer is not competing in the same months.

The English Premier League season begins in August and runs through winter and finishes in May.

They have some pretty harsh winters, but most of the higher league divisions have underground heating, so the turf does not get frozen.

Another popular league is La Liga in Spain – they do have a winter break. The reason is to give their players a rest for a few weeks during the middle of the season.

For the non-professional and youth leagues in the UK, during the winter, many games are called off.

They’re rescheduled for the spring. There’s a demand now for all-weather pitches to continue playing.

It’s not advisory for soccer to be played on icy turf. The ground is too hard for the game to be played safely.

Normally in soccer, there are times when a player hits the ground. The impact of a frozen pitch is tough and can cause many injuries.

The cleats that soccer players use have studs on them and they’re designed to stick into the soil for grip.

If the soil is too hard for the studs to sink into, it can be like going on an ice rink with sneakers on.

Before a professional game in the winter, the referee will test the ground with a pitchfork. If the ground is too hard, the game is off.

If the ground is solid or frozen, then it’s too dangerous to play. In the fall and winter, rainfall is much higher, this can cause fields to be waterlogged.

There’s another reason to avoid turf during these seasons – a ball does not travel well along a flood plain!

Fields should be inspected before a game with the players’ safety a prime concern.

A hard court indoors can be great to play on, but if it’s outdoors it’s too slippery. If there’s heavy rainfall, you need the right footwear, even then it can be slippy.

When it’s freezing outside, any moisture that gets on the pitch can make it like an ice rink.

So to enjoy your game, an indoor hard court is a good option, although there’s a better option.

The best option for playing soccer in the winter months is artificial grass. There are three different options, 2G, 3G, and 4G.

For artificial turf, soccer cleats that are worn on grass fields are not suitable – they can cause an injury to the ankle easily. Special artificial/astroturf boots are available.

2G has a slight height of artificial grass which is similar to that of a tennis ball. Because of the short strands, it does not take long for the grass to flattened. This type of field can also be very slippy in the winter.

3G has substantially great depth in length to the artificial grass, making it more like turf.

Across most of these types of pitches are rubber pellets, which keep the longevity of the grass and give if soft spongy feel to the feet.

The 3G pitch is also suitable to play on during the winter months, even when it’s icy or snowing.

The best soccer surface to play on during fall and winter is 4G field – indoors or outdoors. For safety, practicality, and an enjoyable game.

Soccer is a physical game and there’s a lot of running to do. The coolness of the winter cools the players down quickly, so there’s no danger of overheating.

The chance of dehydration is minimal during these months and less water is needed to be drunk.

If you play on the wrong surface as we looked at, there can be a real danger of injuring yourself or an opponent.

If you don’t have the right cleats on or you play on a dangerous surface, an injury can quite easily occur.

If there’s a field near you, that has a 3G or 4G pitch, it’s more than adequate to play soccer there in the fall and winter.

Ideally, if you have a sports center where you can play indoors – be sure to wear the right kind of cleats for it.

Playing soccer outdoors can be free, so there can be more of a cost to playing in these seasons, but it’s worth it.

Soccer for the professionals in the States is not played in the winter but it’s possible to play on the right surfaces with the correct cleats.

Official Soccer Rules for Yellow Cards: You Must Know 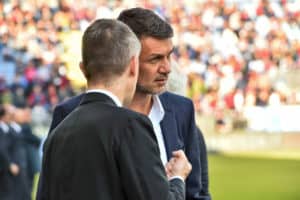