The best soccer is played at an incredibly fast pace. The ball moves quickly. The players move quickly. And if you don’t have the ability to think and play fast, you’ll be left behind.

As a player, if you take too much time trying to decide where the ball needs to go, you’re putting yourself at a massive disadvantage. The opponent will be able to easily steal the ball.

Alternatively, if you are not able to think quickly in defensive situations, attackers will move easily past you and you’ll be struggling to recover.

A team full of players who are able to think quickly on and off the ball will find it much easier to keep the ball, score goals, and win games.

Decisions to make in soccer

There are an infinite amount of decisions to be made in every moment of a soccer game.

Every decision is important. Making the right one more often than not is what sets teams apart. Can you get by in a game making some wrong decisions?

Sure. It’s inevitable that both teams will make the wrong decisions on multiple occasions throughout a game. Ultimately the team that makes the most correct decisions will come out on top.

Decision making is crucial in all aspects of soccer.

A player who does not make fast decisions spends more time on the ball or figuring out where to be.

If you play fast, you don’t have to spend time unnecessarily looking around at the ball or knowing where other players on the field are.

Fast-thinking players have anticipated and processed that information already. They can move the ball almost as quickly as they receive it.

How to think fast in soccer?

Thinking fast, in a sense, means not thinking at all. If you don’t have the ability to think fast, you will spend too much time on the ball.

Constantly working on fundamental skills like passing, dribbling, shooting, and defending will increase your ability to play fast.

Eventually, these skills should become second nature and improve over time.

How to make faster decisions in soccer?

To make decisions faster – when playing, training, or watching – make a mental note of how you could do better. Know what to expect.

There are many drills and games that can be used in training to increase a player’s ability to make faster decisions.

Regardless of your skill level, these drills are useful and can be modified to benefit any player to think faster.

This simple drill is more like a brain-game. Someone lightly tosses a ball towards the player. As they toss the ball they shout either “head” or “catch.”

Although the game is simple in its rules, it forces the player to think on their feet and concentrate to make the right decision.

As players get more comfortable, the speed can gradually increase the speed at which they throw the ball.

The player who returns the ball the most without making any mistakes is the winner.

This drill can be done in all aspects of the game by commanding a group of players with the ball to stop, control, turn, pass, dribble, or shoot.

There are many variations of passing lines that can be helpful for players of all levels and abilities.

This game gives players the chance to take three shots in quick succession with the objective to score as many goals out of three as possible.

The aim of this drill is repetition in stages. This will help players react automatically to situations.

Alternatively, keepers have three chances to save shots from various distances and angles – requiring quick decisions to be made.

These drills are great for training a player’s brain to anticipate and react quickly to many different scenarios.

How to improve speed of play in soccer?

Speed of play in soccer is improved through training, perfecting fundamentals, and replicating what you will see in a game.

One of the best ways to incorporate all of these is through the use of small-sided games.

Played in tight spaces with a reduced number of players, the lack of space increases the pace at which the game is played and forces faster decision-making.

Some examples of small-sided-games are:

These restrictions force players to act quickly and those lessons will eventually translate to gameplay and speed.

If you want to learn how to react quickly to difficult decisions in a game, it’s important to challenge yourself and replicate those situations in training.

When playing these games, it’s important that players have the opportunity to make mistakes.

Playing quickly and in small spaces is going to lead to an increase in mistakes. Keeping the game moving means more repetition.

Stopping too often to go over coaching points will only make players over-think their next move. It’s important not to encourage creative freedom.

Understanding your tactical role within a team will improve the speed at which you make decisions.

If you, as a player, are confused about where you should be, you will continually make bad or slow decisions and potentially fatal mistakes.

Coaches must be very clear about their tactics and make sure players know their role. In some formations, an outside fullback will be part of attacking moves.

They will press forward and support the midfielders and forwards.

However, if they do not know the right time to press versus when to stay back, they leave their team vulnerable.

Part of decision-making in soccer is understanding how to think multiple steps ahead of your opponent.

The ability to anticipate where the ball will go one or two passes after it’s left your foot makes your team difficult to defend.

When you watch the world’s best, this is evident. Poland/Bayern Munich striker, Robert Lewandowski is a great example.

Even when his team is defending, he’s anticipating where he needs to be to receive the ball when they do win it back.

Similarly, when defending, players should anticipate opponents’ passes to cut off passing lanes and take away as many options as possible.

If you’re constantly reacting to where the ball goes, you’ll struggle to ever win the ball.

Soccer is about control and if you can anticipate where the ball is going or needs to go, you can control the game.

“The best decisions aren’t made with your mind, but with your instinct.”

As the world’s best player, Messi understands that he does not have the time to think during a game.

He’s spent so much time perfecting his craft, that at this point, everything that he does is purely instinctual.

The more that you work on playing faster and getting comfortable in tight situations, your decision-making will continue to get fast, and eventually, you will be playing with instinct. 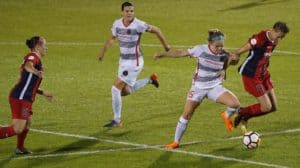 What happens if soccer players fight? What Will Happen