Soccer is not all about scoring goals, but it sure is fun to do so. Defenders will also celebrate like they’ve scored a goal when they clear the line.

It can be tough to score a goal, especially against strong teams, but you’re in the right place to find out how you can hit the target.

This guide for kids, youth, and beginners to help you score more goals.

how to score more goals

Players score soccer goals by kicking the ball between the upright frames and beneath the crossbar. For a goal to be given, the entire soccer ball must cross the line that runs from one upright to the other.

A soccer goal is worth one point on the score sheet.

To score a goal, it’s best practice for youth to hit the target with as much power as they can. Remember these key points;

As a player develops from their youth, the focus of a shot will be to aim either side of the goalkeeper. Continue reading to find out how to score every time…

Why is it so hard to score in soccer?

Soccer is a low-scoring game. In the current MLS season, the average amount of goals scored per match is 2.5. That’s low scoring compared to sports like football.

But why’s it so hard to score in soccer? Apart from the relatively small goal area, which is 24 feet wide and 8 feet high, the game’s speed plays a big part in the low scoring.

It’s difficult to move the ball upfield at speed without losing it. So, teams lacking good technical ability tend to play slowly.

A team that plays slowly allows the opposition players to organize themselves into position.

This means that the team defending their goal can get many players behind the ball before the slow team nears their danger zone.

See also  How Many Points Is a Goal Worth in Soccer?

The more opposition players there are between the ball and the goal, the harder it’s for the attackers to score because a team with many players defending the goal has a higher chance of stopping the ball.

For this reason, teams that move the ball quickly find it easier to score. It’s also why transitions in play are one of the most dangerous times for the team losing the ball.

Often, speed is key to scoring when it means the opposing team can’t get back into position. A great example of that can be seen here;

Notice it takes only 10 touches and 20 seconds for the team to score the goal!

So, if all it takes is speed, why not pack a team with sprinters and score lots and lots of goals?

If only it were that easy. The truth is, it takes great skill and teamwork to move the soccer ball with speed effectively. And it takes more than speed to score goals every time. 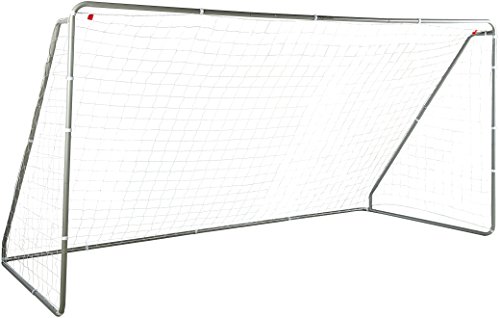 How do you score a soccer goal every time?

To score soccer goals every time, one thing helps above all else: practice. But to get better at scoring soccer goals, Players must know the best things to practice.

If you practice these, they’ll be scoring soccer goals for fun in no time.

English Premier League champions Manchester City scored 83 goals this season, 73 from inside the 18-yard box, a rate of 88%.

Top tip: Practice getting into different positions inside the 18-yard box.

See also  How To Play Soccer (Beginner To Pro - All Positions)

As few touches as possible; Inside the 18-yard box, the fewer touches the better. This gives defenders and the goalie little time to react. A first-time shot is the best of all. But this takes practice.

When inside the 18-yard box, take as few touches as possible to score lots of soccer goals.

Top tip: In practice, take 4 touches before shooting and work down to 3, 2, and 1. Then, try shooting first-time without any touches.

Stay calm; This gives them a better chance of scoring goals. So, stay calm and score goals.

The best players make it look easy because they’re composed under pressure. When inside the 18-yard box, take as few touches as possible and stay calm to score goals for fun.

Top tip: To practice staying calm, ask family members or friends to put pressure on you inside the 18-yard box.

Keep it low; A low shot makes it harder for the goalie to reach the ball. This increases the chances of scoring soccer goals. And scoring goals is fun.

When inside the 18-yard box take as few touches as possible, stay calm and shoot low to score lots of goals.

Top tip: Keep your head over the ball when you shoot.

Shoot to the sides; The side of the frame is the hardest place for the goalie to reach. Players can practice shooting the soccer ball as close to the upright as possible while staying on the frame.

When inside the 18-yard box, take as few touches as possible, stay calm and shoot low to the sides to score soccer goals every time.

Top tip: Practice shooting from close to the goal line and move back as your accuracy improves.

See also  How Hard Is It to Play College Soccer? (Find Out Here!)

Players who follow these five steps and practice will score soccer goals every time.

Now that we know how to score soccer goals every time, we’ve to know what to call all the goals we’ll score.

What is a super hat-trick?

This is also referred to as a perfect hat-trick. A super hat-trick is rare in soccer.

Keep practicing, stick to the key points in this article, and you’ll score more goals. The more we practice, the more soccer goals we’ll score, making soccer even more fun!

Soccer Players With The Number 2 (Best Outside Backs +)

Why Is China Bad At Soccer? (World Cup/Culture/History)

Is Soccer Easy? (How to Start Playing Soccer)

Clean Sheet in Soccer (What It Means)