We can talk a lot about what the NWSL can do better or what sports networks need to do, but we can all play a role in growing women’s soccer.

What are some women’s soccer ideas for growing the sport? We’ll explore that topic in depth today by reviewing the following:

Let’s dive into some of the easiest ways you can help women’s soccer thrive.

Before we dive into some helpful women’s soccer ideas, let’s take a look at how things are now.

Let’s start with this, a lot of girls play soccer. It’s one of the most popular youth sports for girls in the United States.

The only sport that a greater percentage of pre-teen girls play is basketball. When it comes to youth girls’ soccer, participation is impressive.

Soccer is now a staple for young girls, which is a great sign for the sport.

The age-old argument that “nobody” watches women’s soccer has to make way for some impressive numbers. Put simply, viewership of women’s soccer is on the rise.

The National Women’s Soccer League (NWSL) was the first sports league in the U.S. to return to action during the summer of 2020. That year, they broke viewership records by 300%!

The Challenge Cup’s first and last games, which were the only ones to air on CBS rather than the subscription service CBS All Access, drew 572,000 and 653,000 viewers, respectively — on par with an English Premier League match that week and a Major League Baseball game on TBS airing in the same time slot.

Oh, is that just because there weren’t other live sports to watch? Fair question.

Despite the increase in viewership, media coverage is still behind for women’s sports. Women’s sports in the United States receive only about 4% of all media sports coverage.

As a former female athlete, it is disappointing to see women playing the same sport as men, on the same exact level, and receive way less media coverage and attention.

The battle for equal playing conditions (including equal pay) in women’s soccer has been no secret. As of September 2021, the US Soccer Federation announced it would provide the women’s and men’s national teams with the same contract proposals.

This is only referencing pay for the highest level of women’s soccer. At other professional levels, the difference is still extreme.

Why is Women’s Soccer Important?

Women’s soccer is growing, in prevalence and status, but it has a long way to go. Why does it matter? There are many reasons to help the progress of women’s soccer including:

With this reminder of why women’s soccer is so important, it’s time to dive into some of the ways YOU can help right now.

How to Promote Women’s Soccer

One of the easiest ways to support women’s soccer is to watch. That’s right, simply clicking on your TV and tuning in helps the sport grow.

See also  How Much Soccer Players Get Paid Per Goal (Wow!)

Watching shows media channels that there is a demand for the sport. It is a straightforward way to show your support and move the needle for change.

Of course, tune in to the big games, like the World Cup and NWSL final. But take it a step further. Watch other games. Pick a few teams to follow and root for. Be a consistent supporter.

One of our favorite women’s soccer ideas for growing the sport is to get out there and watch in person!

If you have a local professional team, go to at least one home game. You can also head to a local college game at any level. As a professional player, I can tell you that this kind of support goes a long way.

It’s encouraging and empowering to see people in the stands and hear the crowd ebb and flow with the game.

This is a great way to support players, and it also helps the sport. Again, it shows interest and contributes financially (however small).

Engaging with women’s soccer content on social media is another way to learn about players and support the sport.

Sharing and reposting is a great way to spread the word and get others on board.

Purchasing women’s soccer gear is a simple way to represent the sport and spread interest. But it’s also a great way to directly support the teams, leagues, and players that you love.

No matter if you or your child is male or female, empower women’s soccer by purchasing and wearing/using merch.

I remember thinking it was one of the coolest things ever when I saw a young boy sporting an Alex Morgan jersey at soccer camp.

If you’re looking for a great piece of women’s soccer merch to rep, check out this Nike USA women’s jersey with the four championship stars! 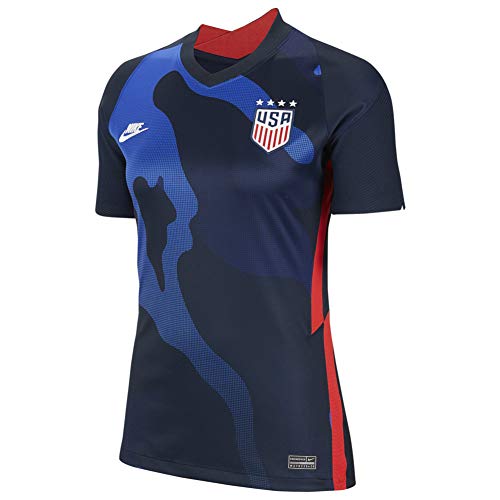 Be A Voice – Advocate

Be an advocate for women’s soccer. There must be a widespread change in the way society views the sport. Silence will not get us there.

See also  Why Do Soccer Players Kiss Each Other!

When you hear someone bashing women’s soccer or players in an inappropriate way, help set the record straight. Don’t be afraid to let them know where you stand and why.

Stop Comparing It to Men’s Soccer

The constant comparison to men’s soccer is one of the most detrimental things to women’s soccer.

Spectators frequently harass female soccer players, and women’s soccer is frequently compared negatively to men’s soccer by writers who make the comparison without the backing of any data and without taking into account anthropometric and physiological differences between the sexes.

Scaling Demands of Soccer According to Anthropometric and Physiological Sex Differences: A Fairer Comparison of Men’s and Women’s Soccer

Even with good intentions, the comparisons are harmful to the sport and female athletes. Instead of discussing the physical differences between genders, or which game is “harder” focus on appreciating the sport and athletes.

Get Involved with Girls Youth Soccer

Whether you have a young female athlete in the family, there are plenty of ways to contribute to girls’ soccer. The push for women’s soccer starts with girls’ soccer.

While many girls play soccer when they are little, far fewer stay with the sport into college and beyond. Ideas for supporting girls’ youth soccer include:

There are tons of simple ways to help women’s soccer right now. While we all want to see policy changes and better media coverage, we each can play an essential part in growing women’s soccer.

Watch it, discuss it, attend games, purchase merchandise, and volunteer. Implement some of the ideas above to help improve women’s soccer for current players and all of the young girls with a dream.

What is a Penalty Kick in Soccer? (Must-Know Rules)

How To Spray Paint Soccer Cleats (Step By Step)