When I first played soccer, it was with friends at school and there were few rules to be concerned about. You had to get the ball from one end to another and kick the ball in the goal.

It was simple, to begin with, but once I played for the school team, the rules changed! Not so much changed, but they were official and a lot more of them – it was confusing.

Soccer is a game that’s played on a field, between two teams. Each team consists of up to 11 players with one goalkeeper each. One team plays in one direction and the other opposite towards the opposing goal and the most goals scored, wins.

The aim is to move the ball into the goal, using any part of the body apart from the arms and hands. The highest-scoring team after 90 minutes wins the game.

But take a minute to read between the lines and you’ll discover there is so much more to the game. There’s history, passion, tradition and so much more!

Soccer unites us. Soccer is the most popular sport on the international stage.

This common interest shared by individuals across the globe brings us together to cheer for our teams and nations as they compete, head to head.

What is the purpose of soccer?

Soccer is a team game, that unites people and brings them together for a fun competition. It’s a game that can be played equally for the small and tall.

In 2010, the world put aside our differences as the North Korea Men’s National Team competed in the World Cup in South Africa.

Although they didn’t advance past the group stage, this competition humanized a nation that was at the heart of global nuclear tensions.

Soccer gives us commonality in a divided world.

Adults and teenagers have one goalkeeper and ten outfield players with substitutes on the sidelines.

You’re allowed three substitutes per game and the players are not allowed to return to the field if they have been taken off.

There are four positions for players;

The number of players for each position will vary depending on the formation of the team.

There is one referee that controls the game on the field with the use of a whistle and hand signals, to keep the game within the laws set out by the IFAB.

Two assistant referees operate along the defensive half of one side of the field, off of the field.

The assistants keep in line with the defense to monitor if the ball is played offside, they’ll also indicate if any fouls have been committed.

Also, there is an official who communicates with the managers, one who signals for substitutions.

A recent introduction is Var Assistant Referees and they monitor the game on screens, looking for anything missed by the officials on the field or to confirm a decision when a request has been made by the referee.

The game can be played on natural or artificial turf. Games that are usually played on a hardcourt are called futsal.

The size of the field is bigger than an American football field and goes to a maximum in the width of 100 yards and a length of 130 yards.

The field is divided into two halves with the halfway line and this has a circle in the center for the kick-off. On each corner, there is a small ark that the ball goes into for the corner kicks.

Around the goal is one large box called the penalty area and this is where the goalkeeper can handle the ball. Within this box is a smaller rectangle, where the goal kicks are to be taken from.

The teams will face the opposite direction and aim for the other goal in the second half.

Length of Game of a Soccer Game

The game is played over two periods called a half. The playing time is 45 minutes per half with added time on at the end of each half, for injuries, substitutions and, time-wasting – this is called stoppage time/injury time.

At the end of each half, an official will indicate with a board how many minutes are to be added to the game.

If the game is a deciding cup match, extra time is normally added on.

There are an additional 15 minutes per half with injury time added on as per usual. If the game is still tied after the extra time, the game will be decided on penalty kicks.

What is a Kick-off in Soccer?

Before the game begins, each team will stand in their own half, where their goal/goalkeeper is. The team that kicks of first is decided by the flip of a coin, done by the referee and the two captains.

Any player from the winning coin flick team can begin the match. The ball is placed in the center of the field and when the player kicks it, the game begins.

The rule was changed recently before two players were needed in the center circle, one player would tap the ball into the opposition’s half and the other player would need to kick it.

When a goal is scored, the team that conceded the goal will restart the match in the same procedure as the kick-off.

What is a Foul?

A foul is awarded if a player;

If the foul does not stop a goal from being scored or is not dangerous, no cards will be given.

Yellow cards are given for handling the ball, time-wasting, stopping an attacking break, and pulling a jersey.

A red card is awarded if a foul is committed that endangers an opponent, studs towards an opponent in a tackle, and for a second yellow card.

What is a Free Kick?

If a team is awarded a free kick, the referee will blow the whistle. The opposing team needs to stand 10 yards away from the ball until the ball is kicked.

The defending team will line a wall of a few players if the attacking team is in a position to shoot. In a professional game, the referee marks the 10-yard distance with a line using spray chalk.

What is a Corner?

When the ball is kicked over the goal line, by the team, where their goal is, a corner kick is awarded.

The ball can go either side of the goal or over the goal for this to happen. Again the opposition needs to stand at least 10 yards away from the ball.

What is a Penalty Kick?

If a foul is committed inside of the goal area, the referee will blow the whistle and point to the penalty spot.

When the penalty kick is being taken, only the taker, keeper, and referee are allowed inside of the box.

What is the Transfer Window?

Soccer is also a business. One of my favorite parts of soccer is the trade window when teams are allowed to buy and sell players to better build their rosters.

Sometimes this is done around a player or coach and other times it’s built around a strategy.

Sometimes players are wasted on the bench at one club. They’re purchased by another team that better fits their strengths and formation.

Raheem Sterling was revitalized under the guidance of Pep Guardiola following some frustrating seasons at his current and former clubs.

You’d of never thought it 20 years ago but soccer is currently at number 5 on the most popular sports in America.

This will surely change as the appreciation grows like the rest of the world. Soccer more popular than golf and boxing!

New laws including video assistance for the referees are making the game much cleaner and more enjoyable to watch.

Once you get a grasp of the rules, you get a deeper look into the tactics, which make it like a chess game.

Soccer has a very rich history, from the individuals who have played the game to the unforgettable matches, both competitive and not, that have occurred throughout the history of soccer.

I don’t think I’ll ever forget Liverpool’s legendary comeback against Barcelona in the 2018-19 Champions League semi-final on their way to being crowned Kings of Europe.

Barcelona, led by Lionel Messi generated a 3-0 advantage heading into the second leg. The lead seemed insurmountable, particularly against such an experienced Barcelona side.

However, Liverpool found a way through with heroic efforts from their veterans and a particularly tricky play from one of their youngsters.

Soccer as we know it’s only been in existence since 1863 when the Football Association was formed in England. However, traces of soccer can be found throughout history.

One example is the use of the body to accomplish a task during ancient Chinese military activities.

Soldiers could use any part of their body, excluding the arms and hands to kick a leather ball through a hoop while dodging attacks from other soldiers.

Other variations of the game can be found in Japan, Greece, and Rome.

Historians have concluded that these games of skill using surfaces of the body other than hands are the earliest accounts of soccer in our civilization.

Although I wouldn’t put it past the cavemen to play a lively game of soccer every now and then. Read the invention of soccer here.

On an even more memorable Christmas Day in 1914, British and German soldiers engaged in trench warfare against one another called a ceasefire for the Christmas holiday.

That cold, muddy Christmas day on the battlefield, they came together to wish each other a Merry Christmas, sing carols, and dream of a world without war!

After the festivities, the soldiers played a game of soccer in no-man’s land. It’s hard to imagine the two groups shooting at each other one day and playing a lively game of soccer the next.

These young men had two things in common that night: missing their families on the front lines that Christmas night and a game that united them for a day before going back to the realities of war.

Soccer has seen some interesting things throughout its history. For a detailed look at how soccer has changed, read this article here.

Summary of What Soccer is…

To sum it all up, soccer is our history, our passion, our culture, and our common language. When you boil it down, soccer is just a game. However, when we pour our passions and pride into it, soccer gives us much more than a game could.

It gives us connection, community, heartbreak, euphoria, and everything in between. That’s what soccer is and I wouldn’t have it any other way. For more useful guides, see the articles below or visit our home page.

What are soccer positions?

What are soccer balls made of?

Modern soccer balls are made from synthetic leather, cloth, a rubber bladder, and a valve to inflate or deflate the ball to the desired pressure. Early soccer balls were made with real leather and had laces to keep the panels together. 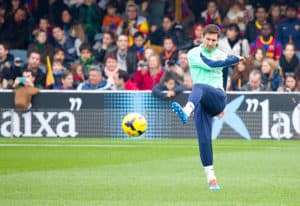 Soccer Practice: Be Prepared and Skills to Learn

Number of Soccer Players on a Field: You must know